With 59,427 metres, 2,377 track panels, 996 workers and 171 days, another metro "dragon" was successfully placed under the city. On May 31, 2021, with the completion of the last pump of concrete, the first phase of Ningbo Metro Line 5, which is provided by CANLON with integrated waterproofing system services, is "railway open", which is a big step towards the goal of opening operations within the year.

The first phase of Line 5 starts from Haishu Buzheng Station in the west and ends at Zhenhai Xingzhuang Road Station, with a total length of 27.9 kilometres and 22 stations, of which, there are interchange stations with 9 lines in Ningbo, making it the proper "King of Interchange". 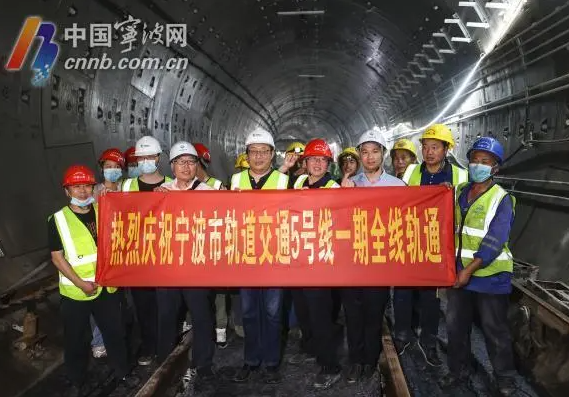 In addition, the line passes through the Haishu district, Yinzhou district, Jiangbei district and Zhenhai district, and will form a ring-shape construction with the second phase of construction, bringing great changes to the economic development of Ningbo and the people's habits of life really let Ningbo rail across an era.

Due to the difficulties such as tight construction period of rail laying and many bed types, Line 5 said to be a milestone project in the history of Ningbo rail transit, and it is probably not too much. As the beginning of the new rail traffic era in Ningbo, CANLON MBP is successfully applied in the project, which once again confirms the excellent quality advantages of integrated waterproof.

At present, CANLON MBP-P has been successfully applied to rail projects in various major cities such as Beijing, Hangzhou, Changzhou and Nanchang, and its advantages of energy saving, environmental protection and time saving have been greatly admired by the owner and the main contractor.

As a result of the above information, do you have a better understanding of CANLON, a national high-tech enterprise that integrates R&D, production, sales and construction services? In addition, we also produce Likfix anti sagging polyurethane waterproof coatings, PVC roofing membranes and MPU polyurethane roofing coatings. For each material, we have strict process of quality control. If you want to know more, please pay attention to our company, we will provide you with the best quality service.